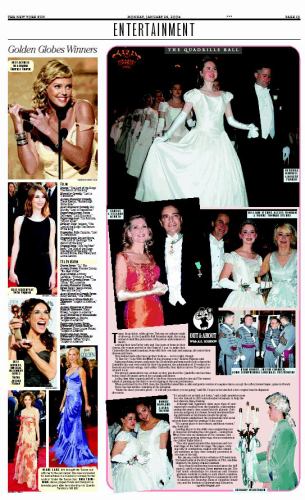 rts, white gloves: This was no ordinary night of dress-up. At the Quadrille Ball Saturday night, the young women looked like princesses, with posture and manners to match.

Leaving their Ann Taylor suits and Gap jeans at home in their closets, the women arrived at the Plaza at 3 p.m. to make their Cinderella-like transformations. Some did their own hair and makeup; all rented their dresses and tiaras.

They helped each other lace up their bodices not too tight, though. It was very Gone With the Wind in the dressing room, Viktoria Prigarina said.

Sales associates, lawyers, and poets: the 20-odd men and women selected to dance the Quadrille this year were ready for their big moment, the culmination of 10 weeks of rehearsals and social outings. And unlike Cinderella, they had no curfew. The party lasted until 4 a.m.

The groups camaraderie was evident as they practiced the Quadrille one last time before some 200 guests arrived for cocktails and dinner.

As Bey-Shan Chien tripped and fell to the floor, the men rushed to her aid.The women talked of pinning up her skirt to avoid tripping at the real performance.

When performed by the 2004 class, the Quadrille looked like a calm and gentle version of a square dance, except the caller, Gordon Cooper, spoke in French. There was last-minute cramming at the rehearsal. Study the sheet you were given it will tell you where you are going, said Mr. Cooper as he watched a few couples head in disparate directions. Its actually not as hard as it looks, said a ball committee member who danced in 2000 and attended rehearsals to help the new dancers, Cheryl Fielding.

Although ball organizers claim more than 40 marriages have resulted from the Quadrille, relationships among this years class seemed strictly platonic. Partners are assigned, not chosen. Several mentioned having girlfriends or boyfriends outside the group.

Participants emphasized the professional and social network more than the prestige of the event. Its a great place to meet smart, ambitious women, Amy Czech said.

Lending import to the affair was a supporting cast of characters including the color guard cadets from West Point who are members of the German Club and the pages sporting white wigs, who are students at the Joffrey Ballet School.

The color guard mounted the American and German flags on the ballroom stage. The pages, carrying fully lit candelabras, walked with the committee members as they were formally presented at the start of the ball.

Bob January conducted an orchestra of 20 musicians. The band leader at the first Quadrille, in 1961, was Max Hamlisch, the father of Marvin Hamlisch.

More than $3 million has been raised since the ball started, said its chairman, Carole Haarmann Acunto.The ball funds scholarships for American and German graduate students to study in each others countries. The monies are distributed by the Germanistic Society of America, the Deutsches Haus at Columbia University, and the Institute of International Education.